Winner of the: Racial Justice Award 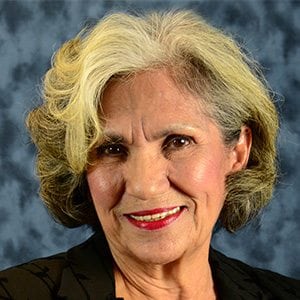 Connie Meza is a fourth generation Arizona Native. Connie’s siblings attended and graduated from St. Mary’s elementary and high schools. These formative years combined with the deep family convictions, religious beliefs and values set the stage for Connie’s strong belief and advocacy for equal rights for women and minorities. Connie attended St. Mary’s Elementary and St. Mary’s Girls High School. After graduating from St. Mary’s she married and raised a large family. This is where a significant change to her life occurred and her story begins.

Connie Meza is the mother of 10 children. Her youngest, Rosemary and Margaret Mary, were born twins prematurely; at the time, premature babies usually did not survive birth. An Arizona Republic article described Rosemary and Margaret Mary as miracle babies. They were born less than 3 pounds each. Unfortunately, Rosemary died after two weeks and Margaret Mary, who was deaf and severely disabled, remarkably lived to age five before passing. While her eldest child was still in high school, Connie began taking classes at Phoenix College. She separated from her husband, began working to support 9 young children, and eventually divorced. After the death of Margaret Mary she increased her college workload, graduated with an Associates of Arts degree from Phoenix College and enrolled at Arizona State University, graduating with a Bachelor of Science in Criminal Justice in 1978. At the age of 37 years Connie had earned her AA and BS degrees, all while supporting and raising a large family.

After graduating from Arizona State University, Connie Meza returned to Phoenix College as Director of Student Special Services. She administered programs that provided a multitude of services to disadvantaged and disabled students. This involved the supervision of counseling services, professional staff, student/peer advisors, recruitment and retention of students and academic and career guidance. She also implemented out-reach efforts to increase minority enrollment and retention. A major priority was to ensure the active inclusion of disabled students in college life. Her tenure at Phoenix college was in the mid- 1980s, Connie sought and advocated for fundamental services that are now taken for granted. While at Phoenix College she emphasized tutoring and support services for at- risk students and to further efforts to provide equal opportunities for women and minorities. She also was involved in scholarship recruitment and selection. Her efforts to further educational, professional and employment opportunities were constant throughout her career and life.

Connie’s background includes management experience with the Circle K Corporation, as Personnel Manager, Administrator for the National Network of Hispanic Women in Los Angeles, California, and Business Administrator for the San Gabriel mission in San Gabriel, California. She later became Director of Contract Compliance of Guess? Inc., in Los Angeles. Her work in Contract Compliance focused on the Garment Industry in L.A. She developed an expertise in federal labor law and uncovered widespread abuse of employees’ wages and working conditions. She developed programs for uncovering and reporting labor violations and mistreatment of women, children and minorities. A particular concern for her was the exploitation of undocumented workers and children. She was well-known in the Asian community for her efforts to help individuals who suffer from disadvantaged circumstances and lack of opportunities, and those who are denied fair treatment and opportunities. She aggressively investigated criminal activity in the Los Angeles garment district because her firm believed that women and workers should be paid a decent wage for work performed and recovered unpaid wages and not be subject to unsafe working conditions. She believed that children should be protected and nurtured, not abused by unfair labor practices. Connie was not a welcome advocate for those who took unfair advantage of vulnerable people.

Connie has a long history of service. She has served on numerous boards and committees, both state and local, and volunteered for many community activities and projects. This included work with the comprehensive Advocacy Program, working with indigents, for the Los Angeles County Superior Court. Conducting pre-sentence interviews for the Maricopa County Probation Officer; Member of the Juvenile Justice Advisory Committee for the City of Phoenix; Member of the Arizona State Behavioral Health Board; the Governor’s Council on Children, Youth and Family; Arizona Girl Scout Council; Girl Scouts of America; and a host of others over the course of many years.

After several years in California, Connie Meza returned to Phoenix. Her love for children and devotion to education led Connie to return to Arizona State University. She completed her Master’s coursework in Bilingual Education/English as a Second Language, and became an elementary school teacher. She was 64 years old.

Connie Meza has had a life and career that is rooted in her commitment to service: service to God, service to family, service to others. Her beliefs and character were evident in her personal and professional life. Her resume demonstrates a career that required leadership, commitment, and an ability to manage others and work toward goals that benefitted diverse people. Her community and volunteer activities are a reflection of her commitment to others. At each stage in her life, Connie was devoted to providing and furthering opportunities for women, minorities, the disabled, disadvantaged, and children.