At YWCA Metro Phoenix, we’re building just, equitable Arizona communities that embrace and celebrate each person’s inherent value. That’s why YWCA is collaborating with communities who are seeking justice, working in partnership to build a more free, more peaceful world.  Together, we identify systemic racism and gender discrimination – and dismantle it.

As Arizona becomes the next tech hub, we have tremendous opportunity for our STEAM (science, technology, engineering, arts, mathematics) professionals to reflect the state’s workforce diversity. Addressing these gender and racial gaps will support Arizona’s economic growth by developing our next generation of STEAM innovators.

In partnership with Intel Arizona, YWCA is leading the new Equity in STEAM Initiative to advance women and people of color across STEAM careers, to improve representation in STEAM statewide.

Nonprofits, public schools, and charter schools across Arizona may apply for this funding opportunity and participate in a YWCA learning community. Projects should be focused on enabling the following outcomes:

With this grant initiative, we are asking applicants to create or continue a project or program within their 501(c)3 to connect social equity to STEAM – whatever that looks like for their organization.

Examples of possible uses of funds (this is not an exhaustive or prescriptive list):

This initiative is geared towards grassroots nonprofits and educators working to inspire underrepresented students to consider STEAM careers.

Q: Is my organization eligible for a grant?

A: To be eligible for a grant from the Equity in STEAM Initiative, your organization must be a nonprofit organization as determined by the IRS, with a budget of $1M or less during your last fiscal year, a public or charter school, or college within Arizona.

Q: What is the maximum amount my organization could receive?

A: For the Equity in STEAM Initiative, the maximum grant amount is $2,500.

Q: I have submitted my application, now what?

A: After submitting your application, stay tuned on the announcement date. A list of grant recipients will be posted on our website, ywcaaz.org/equityinsteam and an email will be sent to all that applied. The grant contact will receive an email whether they were selected for funding or not. If selected, your organization will receive follow up information within 10 days of the announcement date.

Q: Who should I reach out to with questions about the grant cycle?

A: Please email grants@ywcaaz.org and allow up to 72 hours for a response from the YWCA team.

Q: How long is the application open?

Q: Are existing programs given priority over new concepts that have yet to be implemented?

A: All programs that are submitted are evaluated for their overall impact on the applicant’s beneficiaries.

As the launch of the 2023 Equity in STEAM grant cycle, our storytelling event with STEAM professionals of color aims to help us recognize and create change in the sector. Watch as we hear stories from professionals in STEAM careers who are passionate like we are about eliminating the race and gender gap across the sector. 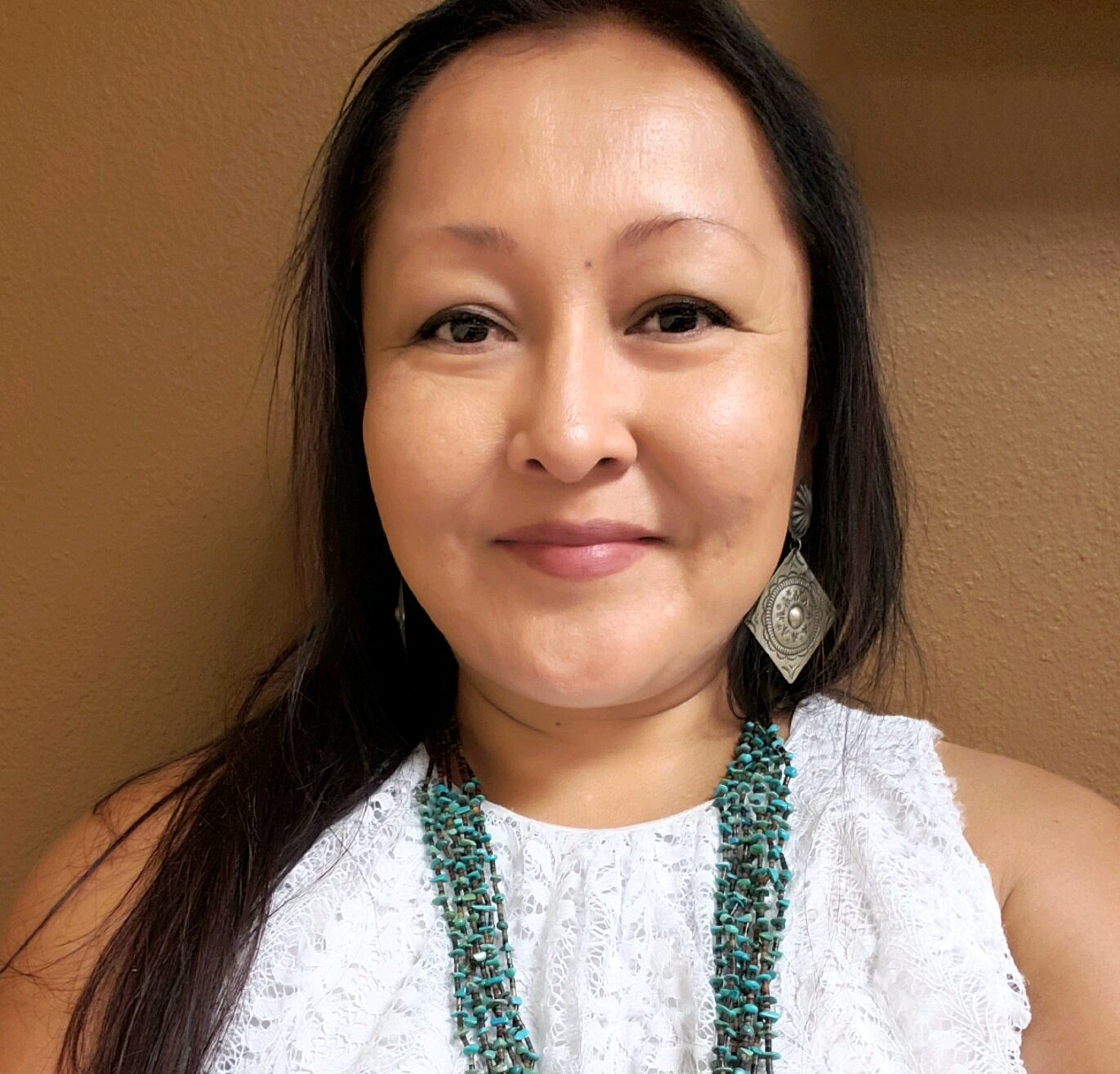 Jolene was born and raised on the Navajo reservation (Chinle, Arizona) and has been an employee of Intel for 21 years.  She received her BAS in Electronics Engineering from ITT Technical Institute in Phoenix, AZ. Her daughter, three sons & grandson are the light of her life.

Her Intel technical experience consists of a Manufacturing Technician, an Engineering Tech and currently, a Research & Development Module Engineer.  In addition to her technical job role, Jolene’s 18+ year member and leadership role in the Intel Native American Network (INAN) has resulted in a vast number of volunteer hours towards the Native American communities in Oregon and Arizona. Jolene also drove cultural learning for Intel participants to ensure the relation between Intel and Navajo Nation is a respectful and growing one, and she secured and managed a $37K travel budget for Intel participants who traveled to/from the Navajo Nation. She has been actively involved with a non-profit organization AISES (American Indian Science and Engineering Society) for 16+ years. Jolene’s passion to reach out to the Native youth to inspire and role model STEM (Science Technology Engineering Mathematics) learning is a very important part of her life. 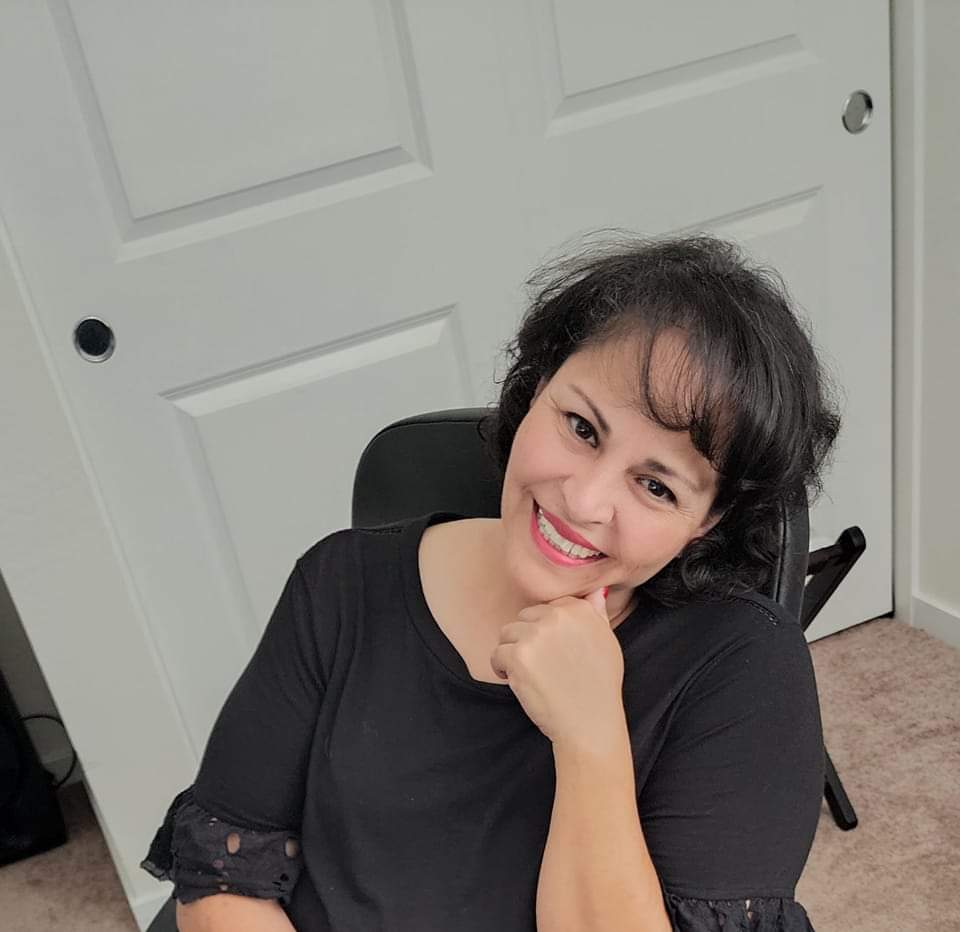 Karla was born and raised in Hermosillo, Sonora, Mexico. She attended school in Mexico until her second year of college, when she moved to Arizona with her boyfriend while pregnant with her first child. No English, no official immigration status.

Karla worked as a babysitter, cleaning houses, delivering pizzas, and as a mailing clerk while her immigration status was cleared out. Once Karla got an official permit to work in this country, Karla started working as a custodian at Arizona State University after delivering her second baby boy.

After two years working as a custodian, Karla attended engineering classes. She managed to work, raise her kids, and study computer science. Karla obtained a bachelor’s degree in Computer Science and a full-time job at Intel Corporation, the company that paid for her tuition so that Karla was able to obtain a master’s degree in computer science at the same time she was working. Karla has now been with Intel for 16 years. She is passionate about emerging technologies, and she loves to see (from the front seat) how technology advances and intervenes in people’s life (medical, education, industrial, etc).

Karla is proud of her 30-year marriage, lives next door to her parents, her daughter who just graduated from medical school and got married, her first son who has graduated from ASU, and her youngest son who started an engineering degree at ASU this semester. 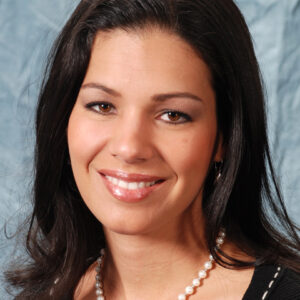 Johana Vallejo-Elias, Ph.D. is a tenured Professor of Physiology at Midwestern University in Arizona and has worked for the institution for 15 years. She was born and raised in a small, underserved “barrio” in San Lorenzo, within the mountains of Puerto Rico. She always had an insatiable curiosity to understand how the natural world works, which led to her interest in research. As a first-generation college student in Puerto Rico, applying to Ph.D. programs in the U.S. was daunting due to social, financial, and language-related constraints. After having the opportunity to participate in a few STEM programs for underrepresented minorities on the island, Johana felt inspired to matriculate in the Physiology Ph.D. program at the University of Missouri, which offered her a graduate scholarship for underrepresented minorities (Gus T. Ridgel Fellowship).

Johana enjoys teaching medical professionals, continues to contribute to research endeavors, and is a blessed mother of two precious daughters, 2 and 7 years of age.  She is proudly married for 15-years now to Daniel Elias P.E., who she met during a SACNAS research conference in 1998. 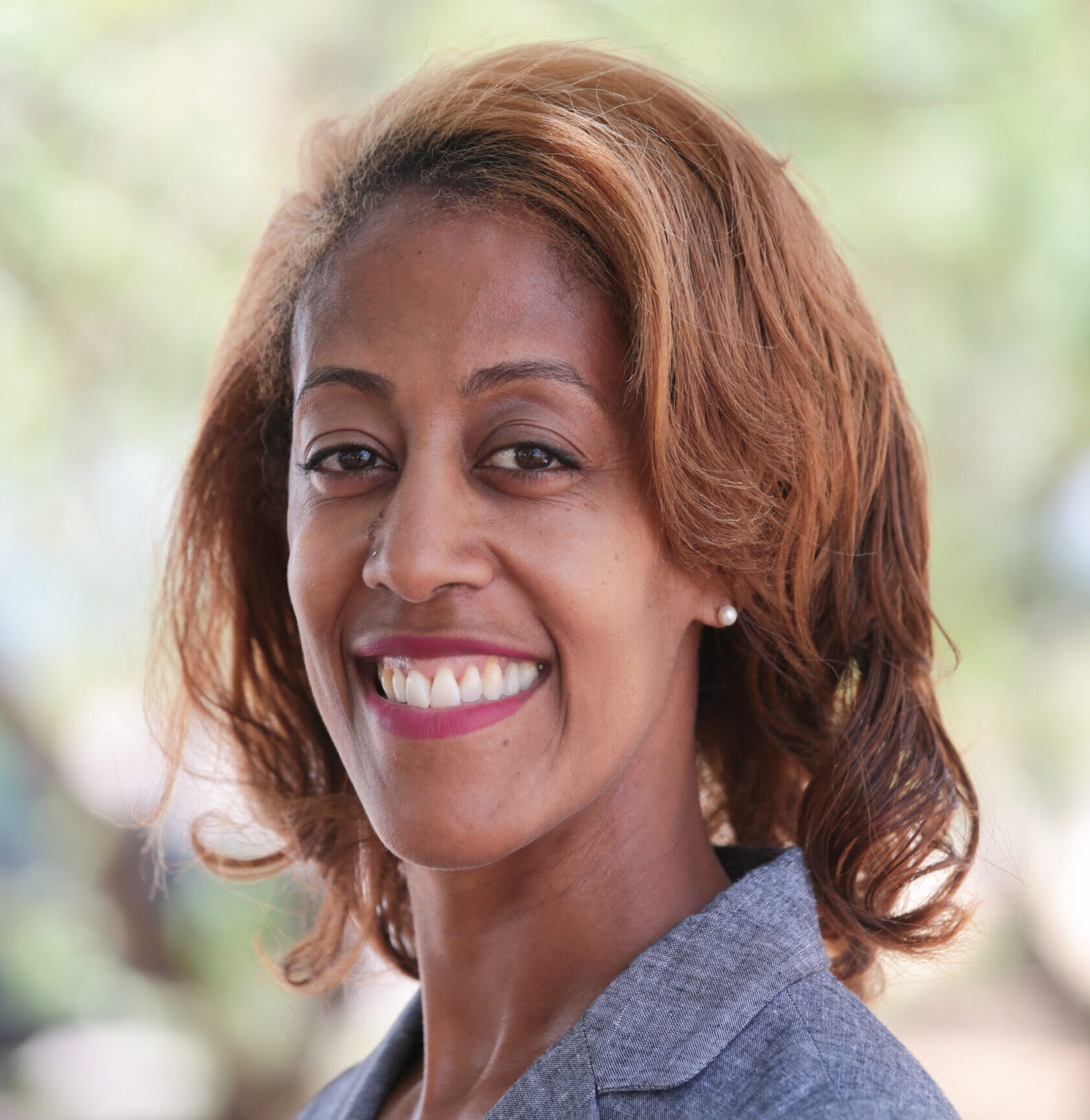 Tara Nkrumah, Ph.D. is a Assistant Research Professor in the Center for Gender Equity in Science and Technology at Arizona State University, Tempe. Through her research agenda centering equitable teaching practices for anti-oppressive discourse and practices in education and science, technology, engineering, and mathematics (STEM), she explores culturally relevant/responsive leadership to increase the underrepresentation of Black girls and women in STEM education and careers.

Professionally, she has received excellence in education awards as a classroom teacher, and the Master Teacher Status in the state of Texas. In 2018, she was awarded Diversity Educator of the Year in the eighth largest school district for successfully educating and supporting the needs of diverse student populations. Pedagogically, she uses culturally relevant/responsive techniques to facilitate co-generative dialogue and problem solving focused on addressing barriers students and educators encounter in schools to improve learning and teaching. Her local and international teaching career for over 20 years gives her insight into fostering student engagement in STEM for social change.

This storytelling event is empowered by:

AzABSE is working towards enhancing the quality of education in Arizona and closing the academic achievement gap. Their aim is to make sure that every child receives equitable education opportunities and achieves their fullest potential.

The students enrolled in the VEX-Robotics program build Robots for VEX EDR competitions every year. The students spend time after school with their teammates gaining skills in building, coding, testing, and driving their robot according to the game rules and challenge.

Youth will participate in a presentation designed to illuminate for Arizona Town Hall participants and board members the importance of power-sharing for meaningful engagement of youth and other marginalized groups.

Basha High school is aiming at empowering women through coding. Through DevOps -CTSO they want to spread awareness about computer science (and related fields) education, create digital awareness and empower the community through knowledge.

Biltmore Preparatory Academy is a Spanish Immersion, kindergarten through eighth grade school. Adding in opportunities and resources such as blocks and building materials, simple machines, and robotics will enhance the accessibility and learning opportunities for all students.

The project involves a semester of activities starting with engineering projects from different fields. Once students have gone through the different projects, students will take time to find and research an engineer with similarities to themselves in a field that most interests them through a type of mirror research project.

Discover Your Future helps at-risk youth engage in holistic learning and develop healthy outlets. The program meets once weekly for two-hour sessions for a total duration of 26 weeks each school year. Dedicated volunteer mentors lead small groups of youth through a fun, yet challenging, high-impact curriculum.

7th Annual Hands-On STEM Fair is a fully planned event from students who have completed the eight-month Hands-On Workshop Program. The four-hour event celebrates student accomplishments with 15-20 tables of activities stewarded by the students

STEAMpowered for the Present and Future plans to invite and include experts in the field to mentor, guide, facilitate, teach, support STEAM project-based teaching and learning, and gain access to professional development opportunities to further develop skills.

I STEAM Ahead will help students learn the foundations of STEAM, collaborate with teams, expose them to technology and machines, and walk away with empowering knowledge. At the end of our program, students will unite all that they have learned to create their own project.

Lights Camera Discover Entrepreneurial Workforce Readiness Program is designed to enhance youth’s knowledge, ability, and skills to motivate them and turn their dreams into reality. Our youth will participate in 24 week program that includes training, internships, and courses that focus on business development, problem solving, digital skills, and exploring one’s own passions.

We intend to involve as many girls in our Robotics project as possible through our outreach at multiple levels. Our students will be provided with VEX robot kits and curriculum to support the first ever all-female VEX Robotics Team

Sisters in STEM shows young girls the opportunity to see the benefits that STEM could provide for them. Our initiatives support these goals as they provide hands-on experiments participants can do both in-person and online in their own homes in live Zoom sessions utilizing common and inexpensive materials or household items

There are many ways to get involved at YWCA Metropolitan Phoenix

Your voice matters as we stand up for social justice, help families and strengthen communities. Whether you have time, talents, or treasures to contribute, learn how you can plug in to the YWCA community.